Ferry’s last-minute offers of settlement were made and accepted immediately before trial in civil court.  Mrs. Ghalmi is to be paid £8,000 by Ferry and Mrs. Grima a similar amount.

Ferry and his co-defendant, a Heythrop rider named John Deutsch, had already been convicted in Crown Court, on 22-5-09, for attacking the two ladies in November 2007. Both men pleaded guilty to a public order offence.

They had originally been charged with robbery and assault, but the former charges were dropped after a claim that it was intended to return the items removed.  However, a video camera which Ferry was accused of having taken has not been returned.

The ladies, however, felt that the sentences – Discharges and £350 fines – which the Judge ordered paid to them as compensation – were nowhere near adequate to reflect the gravity of the offences against them and the terror and trauma they had suffered. They consequently launched civil claims against both Ferry and Deutsch, which have only recently been concluded.

Mrs. Ghalmi and Mrs. Grima were monitoring the Heythrop Fox Hounds on 21-11-07 near Lower Swell, Gloucs, in order to collect evidence of any illegal hunting.

They stated that their car was overtaken and blocked in by a vehicle being driven by Deutsch in a country lane. Deutsch then stormed towards their vehicle shouting abuse at them and violently ripped out the passenger side-window, right next to Ms. Grima, causing the glass to explode into tiny fragments. 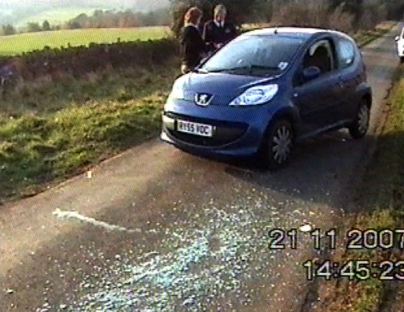 Otis Ferry, who was a guest-rider with the Heythrop that day, then arrived and, also shouting, joined in the attack on the ladies.

Mrs.Ghalmi says that he tried to pull her out of the car, snatched her video-camera and then wrested her keys from her hand, during which her arm and fingers were injured.

Ferry then made off with the camera on horseback and admits he later wiped the film. Police arrived soon after, by when both attackers had made off.  They later found the car keys discarded by Ferry. Both ladies were terrified for their safety throughout the joint attack by Ferry and Deutsch.

Ferry’s last-minute settlement offer meant he did not have to attend Court, but Deutsch continued to contest the ladies’ claims.  Delivering his judgement at Brentford County Court on 5-3-14, Circuit Judge H.H.J.Powles, QC said he found Deutsch’s evidence wholly incredible.

He stated that this was ‘an angry attack by a man who trapped them and made them fear for their safety’, noted his ‘indifference and lack of concern’ and concluded he had ‘deliberately lied to the Court’.  He further stated of Ferry and Deutsch that ‘they acted together’ and ‘each is liable as much as the other.’

The ladies’ counsel, David Rivers of Old Square Chambers, has published a digest of the case online. They were also represented by Howe & Co, Solicitors, of Brentford.

Speaking of the attack and its aftermath Mrs. Ghalmi [right, talking to police] said:- “I am so relieved it is finally over. The judge has listened to the evidence and rightly concluded that this was a vicious attack carried out solely because we were monitoring the Heythrop Hunt and these two individuals took it upon themselves to try and get rid of us.

To be trapped in a confined space in the middle of no where while two men attacked us was a terrifying and distressing ordeal to say the least.  It was a nasty cowardly act by these two men and they should be ashamed of themselves.

I just hope this sends out a clear message to all Hunts that we won’t tolerate this kind of aggression towards monitors anymore. It’s been an extremely long drawn out process but its been worth it to have it recognised at last just how awful an ordeal this was and that when you cause harm to another it is only right and just that you should be held accountable.  On that day we experienced a real taste of what the poor foxes go through.”

Mrs. Grima said:-“I’m just relieved that its now finally over and I can try and move on with my life. As a result of the attack I have been left with severe migraines and they show no sign of stopping, for all I know I may suffer with them for the rest of my life.

I was left with PTSD and this got to the point where it prevented me from wanting to leave my home, I couldn’t even bring myself to go and visit my mother when she was diagnosed with breast cancer.  What these men did was vicious and yet even after pleading guilty they chose to prolong the suffering by dragging this case on for so long, thankfully the judge saw right through the lies.”

Alan Kirby, POWA spokesman, added:- “This is very far from the first time that pro-hunting fanatic Otis Ferry has been in trouble with the law and/or has had serious accusations made against him and his Hunt.  It is gratifying to see he and his companion being made to pay for this vicious attack on two defenceless women in an isolated location.

This was just one of many such attacks, some even more violent and terrifying, by hunters and hunt supporters on anti-hunt activists which occur with disturbing regularity and which the authorities rarely treat with the seriousness they deserve.”

POWAperson adds:-  Otis Ferry’s brushes with the law and trouble he and his Hunt have got into include the following:-

– In 2002, Ferry was arrested while trying to creep into PM Tony Blair’s constituency home garden in darkness at 4 a.m.and was cautioned by police.
– In 2004, whilst pro-hunt demonstators were rioting in Parliament Square, he led an invasion of the  chamber of the House of Commons and was convicted of Disorderly Conduct.
– In 2006, Ferry admitted drink-driving and was heavily fined, but escaped a driving ban when a friend claimed that he had ‘spiked’ Ferry’s drinks.
– In 2007, Ferry was reportedly cautioned by police after spending the night in the cells following a scuffle with a photographer..
– In 2008 he was cleared of two counts of criminal damage against photographers’ cars.
– In 2008, he was arrested on suspicion of perverting the course of justice while awaiting trail for robbery and assault against the hunt monitors. He spent four months on remand. The CPS eventually dropped the ‘witness-nobbling’ charges in mysterious circumstances.
– In 2009, he gave an interview to the Sunday Times replete with foul language, in which he insulted non-white immigrants and called a female Labour MP a ‘bitch’.
– In 2010 a landowner claimed that Ferry’s hounds killed a fox on her land, terrified a cat and horses and that hunters laughed at and abused her. Ferry claimed they’d lost control while ‘trail hunting’, but didn’t apologise.
– Also in 2010, Ferry joined a Radio 5 phone-in under a false name, but was unmasked on air. Presenter Nicky Campbell accused Ferry of assaulting him at a Countryside Alliance rally.
– Also in 2010, a Shropshire village resident published an article on the internet. The woman claimed that Ferry had launched a prolonged campaign of persecution against she and her husband after they reported seeing him beat a terrier to death in his garden.
– In 2011, Ferry appeared in Court charged with failing to give the identity of a driver who’d allegedly committed an offence [outcome unknown].
– In January 2012, Ferry had to apologise after his hounds run amok in a village, caused traffic chaos on a main road and spooked a resident’s horses, endangering them.
– In February 2012, Ferry was the Senior Master when the Hunt called police to a meet at a village pub after anti-hunt protesters turned up. Police took one female into custody, who has recently been paid substantial damages by them for assault and wrongful arrest. Two weeks later, hunt saboteurs say they were attacked by a mob of supporters of Ferry’s Hunt. The same female was targeted and hospitalised with a broken nose and cheekbone [see here 24-2-14].
– Later in 2012, Ferry was convicted of failing to provide a specimen after arrest on suspicion of drink-driving. He was fined and disqualified from driving for 3 years.
March 1, 2014

Police have paid “significant” compensation to a hunt protester who was arrested at a demonstration against the South Shropshire Hunt.

An undisclosed sum has been paid to the woman, who was arrested outside the Mytton and Mermaid public house in Atcham, near Shrewsbury, in February 2012.

They have released a video of the incident which has been posted on YouTube.

It shows a woman being arrested by officers after one claimed he had been pushed by her. But, after a claim for unlawful arrest was made against the force, compensation was paid to the woman, who has not been named.

(Above, footage of the arrest)

A statement by West Mercia Police said today they had attended the scene following reports of a threat of disorder between the hunt meeting and the protesters. Two protesters were detained at the scene, with one arrested.

Deputy Chief Constable Karen Manners said: “West Mercia Police can confirm it has come to an out-of-court settlement relating to the arrest of one person following a disturbance in Atcham in February 2012. A settlement was made and accepted and a compensation payment has been made to the claimant.

“We hope this public shaming, and financial penalty, will force them to modify their behaviour,” he said. “We are pleased that the compensation received by the victim was used for essential repairs of the group vehicle which enabled them to be out in the field saving hunted animals.”