Prime minister has ridden with Heythrop Hunt, which admitted intentionally hunting a fox with dogs 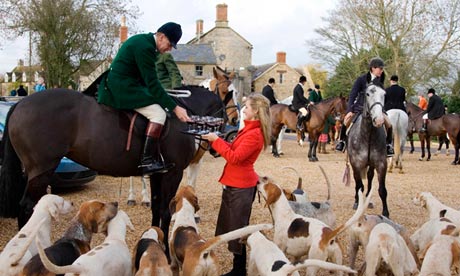 Members of the Heythrop Hunt in the Cotswolds. Photograph: Tim Graham/Getty Images

Members of the David Cameron‘s local Oxfordshire hunt have been convicted of hunting foxes illegally in a prosecution brought by the RSPCA.

Richard Sumner, 68, and Julian Barnfield, 49, of the 176-year-old Heythrop Hunt with which Cameron has previously ridden, each pleaded guilty at Oxford magistrates court to four charges of unlawfully hunting a wild fox with dogs. The hunt, Heythrop Hunt Limited, also pleaded guilty to the same four charges of intentionally hunting a fox with dogs on land in the Cotswolds.

Outside court, Barnfield, a former huntsman with the Heythrop, claimed the prosecution had been politically motivated because of its links with Cameron’s Witney constituency. He said he believed the animal charity was trying to put pressure on Cameron “not to give a free vote” in parliament in any future debate on the Hunting Act, and to embarrass the prime minister.

Members of the so-called Chipping Norton set – an influential group of MPs and media professionals who live in the area – who have links to the Heythrop include the prominent supporter and racehorse trainer Charlie Brooks, husband of the former News International chief executive Rebekah Brooks. Their neighbour Jeremy Clarkson, the Top Gear presenter, has reportedly allowed the hunt to use his land and is among locals photographed at the Heythrop’s country fair. The prime minister is understood to have ridden with the hunt on six occasions before the legislation came into force.

The prosecution followed footage taken by anti-hunt monitors over four days during the 2011-12 season.

The court heard hounds had been encouraged to chase foxes, which is banned under legislation which came into force in 2005.

Barnfield and Sumner, a former hunt master, have since retired from their positions.

Jeremy Carter-Manning QC, prosecuting for the RSPCA, said the hunt was filmed on several occasions in Gloucestershire and Oxfordshire during November last year and in February and March this year by members of the Protect Our Wild Animals group. Footage was passed to the RSPCA. It is believed to be the first prosecution of a hunt itself under the legislation, which abolished the hunting of foxes with hounds in almost all circumstances and, in particular, traditional fox hunting.

Footage shown to the court of an incident on 29 February showed evidence of “prolonged and deliberate unlawful hunting”, said Carter-Manning.

After a fox ran past hunt monitors, who were recording footage from a road nearby, Barnfield drew up on horseback. “Two route-followers indicated to Mr Barnfield the direction in which the fox had run. He immediately blows the hunting horn and enters the field as directed,” said Carter-Manning. Barnfield and another man then gave vocal encouragement to the remainder of the pack, shouting “tally ho” and “forrard”.

In a subsequent piece of film, recorded 40 minutes later, monitors are heard shouting: ‘There’s a kill, there’s a kill,” and: “Call the police.”

Describing the events, Carter-Manning said: “The hounds converge into semi-circles and the screaming [of the hounds] reaches a crescendo. The hounds are making a kill.”

On another occasion, in March, footage shot by a volunteer shows hounds beginning to squeal as they try to flush out a fox from dense cover, “and then almost immediately afterwards a double horn”.

Further footage captures the hounds pursuing a fox and cries of “on, on, on” from the mounted hunt. Barnfield was “filmed quite clearly amongst the pursuing hounds shouting ‘on, on, on’ in obvious encouragement”, said Carter-Manning.

Philip Mott QC, mitigating, said the charges related to four occasions within the full hunting season between November 2011 and March this year. During that period there would have been around 100 hunts, each lasting some five hours. “What you have here is unlawful hunting, shown and admitted, of no more than 15 minutes in total,” he said.

“It is our case that the rest of the time this hunt was operating trail hunting.”

Following the hearing, the RSPCA’s chief executive, Gavin Grant, said: “These defendants were well aware that they were breaking the law in that their actions would lead to a fox being torn apart by dogs.

“No doubt the hunt will say that those involved have now left and they have no knowledge of this crime,” he added. “The truth is this hunt believed that they were above the law – they were wrong.”

The anti-hunt monitors who shot the footage thanked the RSPCA for having the “foresight and courage to take on the prosecution”.

Outside court, Barnfield said he had only pleaded guilty because he could not afford to fight the £327,000 case the RSPCA had mounted.

“We conceded because the money wasn’t there to defend ourselves. I would like to stand there and defend it but there was no way it was possible.

“I am staggered by it all. The fact that a charitable body can take on this political thing and spend so much money which other people have given them for another thing is stunning.”

Attributing political motivation to the animal charity, he added: “They could have picked on any other hunt but they picked on Heythrop because we are in David Cameron’s constituency.

“I think they are trying to put pressure on him not to give a free vote like he said he would, to embarrass him in some way.”

Since 1835 the Heythrop Hunt, one of the most high-profile in the country, has been an intrinsic part of the Chipping Norton community. Huge Boxing Day crowds gather to see it in Chipping Norton Square as one of the market town’s Christmas traditions. In 2003, Cameron, recalled a day out with the Heythrop, saying: “Nothing had prepared me for the sheer terror of a day’s hunting. I battled in vain to control my powerful steed and careered through trees and bushes – completely out of control.”

The Present of Life – Charity Single

Each year Rapanui makes a video at Christmas, The Grotto. This Christmas Santa’s at rock bottom. He’s facing a sales crisis, and so his marketing team suggested that the only way out is to capture the youth market. Thinking big, they decide to go for Christmas Number 1 and enlist the help of some huuuge celebrities.

We’ve teamed up with The Badger Trust to make a real life charity single, and designed some limited edition t-shirts for their campaigns. You can get the track free (if you join Dr.Brian May’s petition, or buy it off iTunes.)

Will Santa be able to save the Grotto with an epic smash hit? Or will it be will it be too little, too late?
*Song royalties & t-shirt profits go to the Badger Trust. Merry Christmas one and all!